How we got started

Where funding comes from 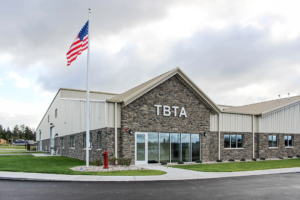 Currently, TBTA holds service agreements for transportation service with Dial-A-Ride with the City of Alpena; and Northeast Michigan Community Mental Health Authority (CMH). TBTA maintains public (open door) transportation to all of the individuals and the community at large within the service areas as noted.

In 2006, Thunder Bay Transportation Authority was organized and began operation as a public body under act 196 of the Public Acts of the State of Michigan to deliver the services formerly provided by the Thunder Bay Transportation Corporation and the City of Alpena’s Dial-A-Ride systems. TBTA merged the two systems into a single system to provide more efficient service to both the city and local rural areas.

The Alpena Dial-A-Ride Transportation (DART) service began operations in 1974 and was the eighth smallest bus system to be started in Michigan. Since that time the system has logged nearly 7.7 million miles and carried over 4 million passengers. Today the DART system consists of 7 wheelchair lift equipped buses operating 7 days a week on a demand-response basis. DART is proud to provide transportation service to all segments of the population within the greater Alpena area, but most notably to the elderly, handicapped, and youth, many of whom have no other means of moving about in our community.

A one-half mill tax levy was first instituted in 1976 by a vote of the City electorate and has been renewed every 4 years by an average 3 to 1 vote margin. In 2005 the electorate approved an increase in the millage rate to 0.65. As of June 2020, the rate is at 1 mill.

With over 35 years of continuous service, Dial-A-Ride looks forward to many more years of providing safe and affordable transportation for the citizens of Alpena.

Vision
Our buses are a real choice for modern, safe, efficient, environmentally friendly community travel.
Our employees continue to be well trained, utilizing the best resources to serve our customers.
Our customers are investors now and in the future as they contribute to the vitality of our communities.
Our passengers leave our buses with a warm and friendly smile.

Core Values
We are accountable and responsible in all aspects of our operations.
We will continuously improve the quality of our operations through creative and innovative ideas leading to higher quality of service.
We conduct our business in an open and honest manner with the highest level of ethics and integrity.
We are charged with providing the highest level of service to our community.
We operate our business in a fiscally responsible manner to ensure financial sustainability.

Many businesses and organizations partner with TBTA to bring you service, including:

The City of Alpena